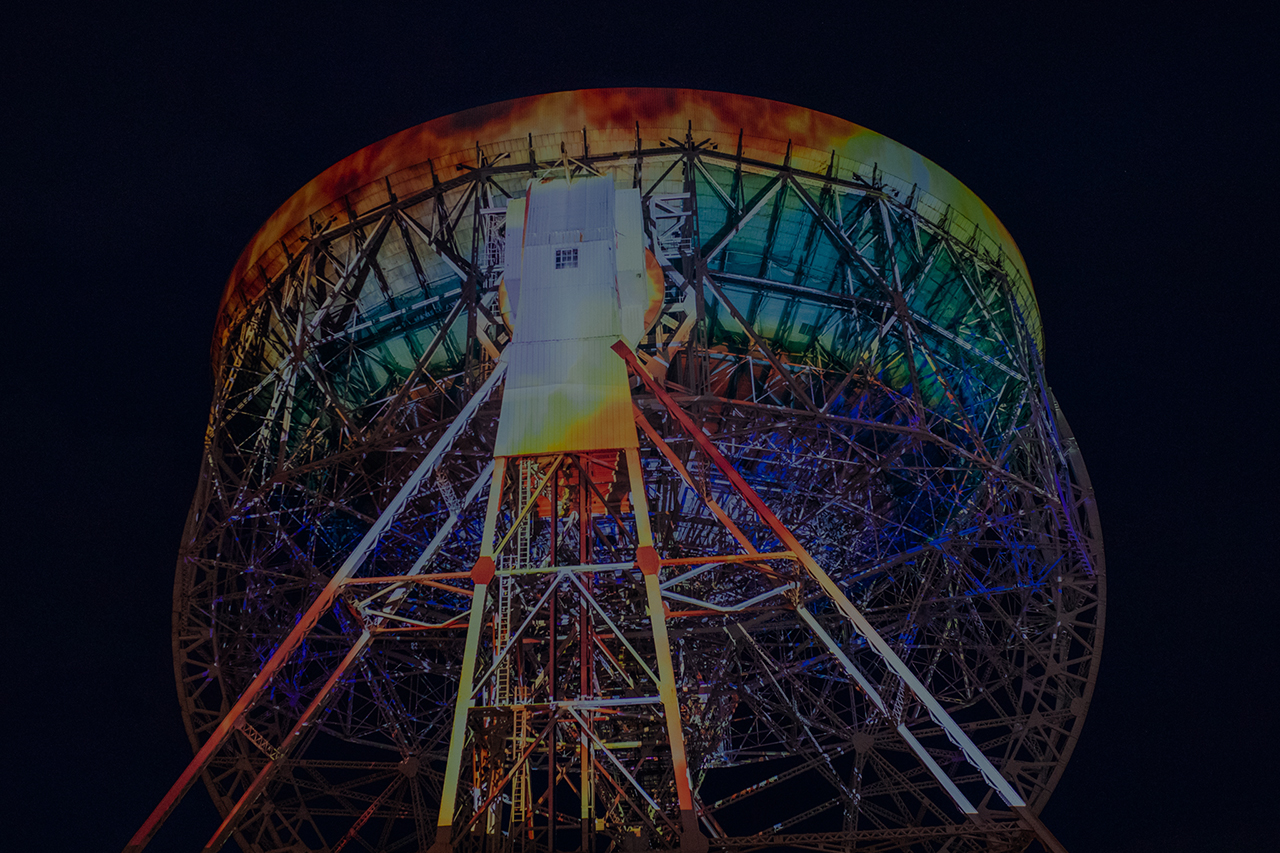 Constructed in 1957, the Grade-1 listed Lovell Telescope is a beacon in the Cheshire landscape and an internationally renowned landmark in the world of astronomy. Even now, it remains one of the biggest and most powerful radio telescopes in the world, spending most of its time investigating cosmic phenomena which were undreamed of when it was conceived.

Since the birth of Bluedot in 2016, the festival has annually transformed this iconic structure into a light-based artwork of staggering scale. Many months of planning goes into the creation of the artwork, which is traditional unveiled on the Friday night of the festival. Commencing with Brian Eno in 2016, every year a new artist is commissioned, working closely with the Bluedot team to realise their vision.

These have grown in ambition and scale each year, featuring many awe-inspiring, off the wall and leftfield elements, some of which are co-created in collaboration with the scientists at Jodrell Bank. For the first time at bluedot, 2022 will feature projections on the face of the Lovell Telescope as it is rotated from pointing into the night sky to face the audience of the Lovell Stage, and the Star Fields.

MOGWAI with visuals by James Lockey

A site specific audio visual film. An evolving journey through history, scale, time & space exploring the fabric of our universe.

A visceral experience from the micro to the macro. A journey of beauty and destruction, discovery and invention.

SIGNAL will be shown every night post headliner in the Star Fields as part of a curated audio visual programme by Greenaway & Greenaway including images from the International Space Station, taken from NASA Image and Video Library.

Greenaway & Greenaway was established in 2009 by brothers Jude and Jolyon, who share a similar attitude and approach towards their artistic endeavours, leading to an organic production process that results in a strong signature style of work. This collaborative process of disciplines, crafting artistic and commercial work, allows them to forge dynamic films for spaces that is a hybrid of video, animation and sound.

A projection onto the surface of the Lovell Telescope combining the latest NASA and European Space Agency spacecraft images of the Sun, the Earth and the Moon. It includes timelapse sequences of the active surface and extended atmosphere of the Sun taken by the Solar Dynamics Observatory  and the Solar and Heliospheric Observatory; the planet Earth from NASA’s ‘Blue Marble Next Generation’ satellite data ; and the near and far sides of the Moon using data from the Lunar Reconnaissance Orbiter which orbits the Moon every 2 hours. It ends with the spectacular first image, just revealed, of the distant Universe taken with the James Webb Space Telescope. The soundtrack features sounds from space, including Pulsars and the Milky Way, within a framework inspired by William Lawes’ ‘Sunrise’ written in the 1600s.

Professor Teresa Anderson is Director of the Jodrell Bank Centre for Engagement.

Professor Tim O’Brien is an Associate Director of Jodrell Bank Centre for Astrophysics.

‘Lunar Loops’ by Illuminos featured a live moon bounce, which transmitted voice audio to the moon in the form of radio waves via the Dwingeloo telescope in the Netherlands, receiving it back on Earth via the telescopes at Jodrell Bank live during the festival, influencing the shape and colour of the live projection artwork.

1,470 light-years away lies the Cygnus constellation, home to Tabby’s Star: a mysterious source of unusual light fluctuations discovered by NASA’s Kepler telescope. It has been observed by humans since the 1800’s, yet recent fascination with the star stems from new research into its strange shifts in brightness. Explanations regarding the cause are varied, but the existence of an extra-terrestrial ‘megastructure’ surrounding the star cannot be ruled out. Drawing inspiration from this hypothesized alien architecture, MegaStructure brought to life the undercarriage of the towering Lovell Telescope at Bluedot festival,

Live pulsar data collected by the telescope has also been used to create a monumental artwork by Japanese artist Daito Manabe.

Electronic music pioneer Brian Eno developed a new piece of ‘visual music’ for the first bluedot in 2016, projected onto the Lovell Telescope. The artwork constantly evolved, born from his continuous exploration into light as an artist’s medium and the aesthetic possibilities of generative software. The art piece was awarded ‘Mind Blowing Spectacle’ award at the Association of Independent Festivals Awards. 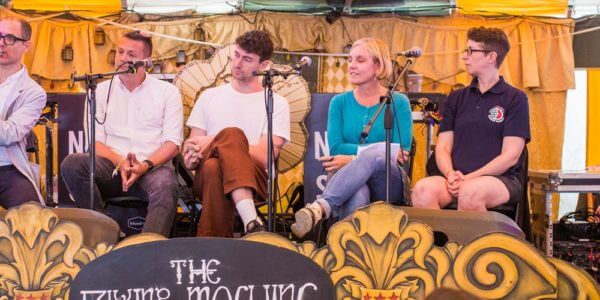 Come and explore the wonders of the universe at one of the UK’s most family friendly festivals! Fa… 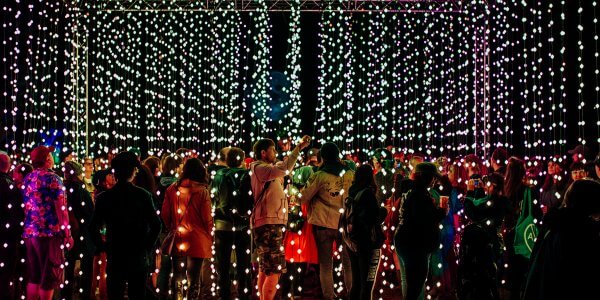 As the Sun disappears and the Moon rises over bluedot, watch as the Outer Space comes to life. Open…