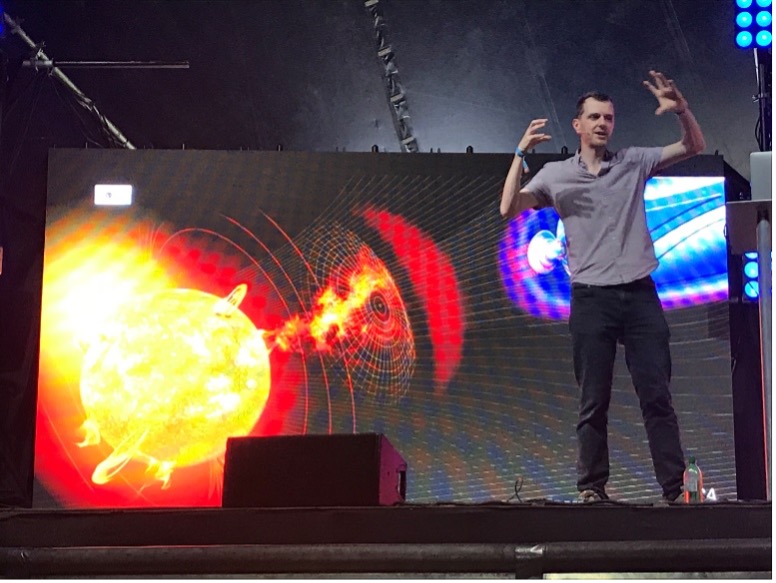 Jim Wild is the Professor of Space Physics at Lancaster University where he studies the space environment and the links between the Sun, the Earth and other planets. This includes the physics behind the aurora borealis and the impact of space weather on human technology. As well as exploiting an international flotilla of ground stations and satellites, this research has taken him on adventures to the high arctic to carry out experimental field work.

Jim completed a doctorate in solar-terrestrial physics at the University of Leicester. As a passionate science communicator, he’s established himself as a popular speaker for public audiences and regularly contributes to print and broadcast media. He has previously held a Science in Society Fellowship supported by the UK Science and Technology Facilities Council and is a recipient of the Royal Astronomical Society’s James Dungey Lecture prize. He is also an enthusiastic fell and ultra-distance runner and enjoys curry in all its forms.

Hollywood loves a good disaster movie, but if Earth-bound catastrophes are looking a bit tame, producers can always rely on calamities from space to entertain audiences. While alien invasions and killer asteroids have packed cinemas for decades, solar disasters are an increasingly popular theme in television and movie plotlines. From devasting solar flares to explosions in the Earth’s radiation belts, scriptwriters have devised a myriad of apocalyptic scenarios to challenge heroic scientists, astronauts and presidents. But is there any credible threat behind these disastrous tales? Can solar activity really threaten life on Earth? Join Prof Jim Wild as he explores the science behind “space weather” on and off screen. Don’t forget your tin foil hat!