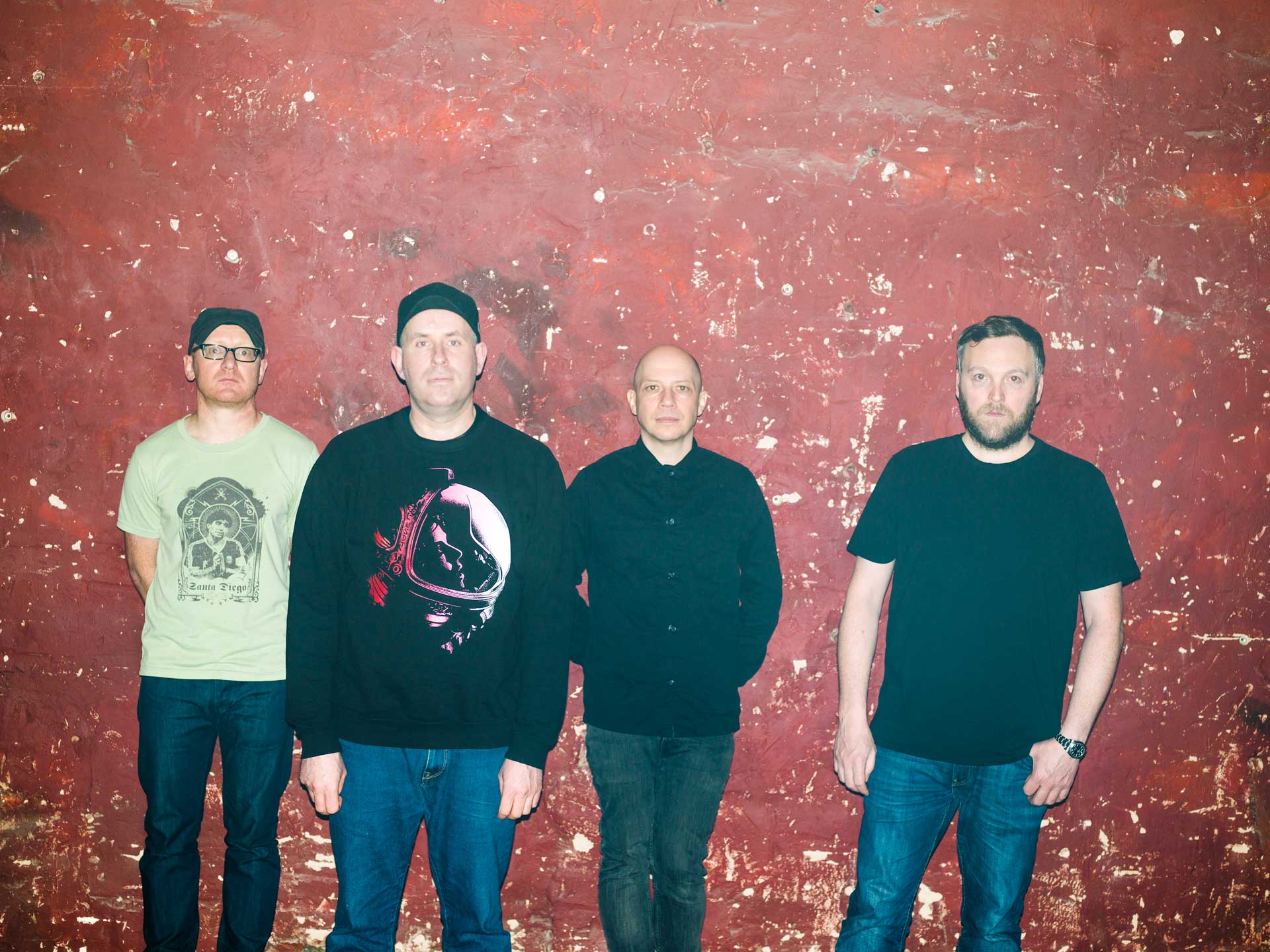 The first time I saw Mogwai live they were sat at a table heckling me. I was presenting an award at the NME Brats. It was a good idea turned bad. I used to do a John Peel impersonation on a late night TV show. The impression came from love not scorn. The idea was that I would go out dressed as Peel, start giving out the Godlike Genius award to Shaun Ryder and then John Peel would come out and say “who’s this dick” and kick me off the stage. Unfortunately, about an hour before, Peel pulled out. I suggested that it might be better to can it, but was told to go out anyway and, without the punch line of the great man, I sank fast in an alcohol flooded room, the jeering led by a favourite band. I didn’t listen to any Mogwai for a good year after that.

Unlike many of the elated and wired whippersnappers in that music press gathering, Mogwai have not faded or seen their admirers change T shirts for other bands, 2017’s Every Country’s Sun was their biggest seller and now they are playing arenas. I last saw them at The Leith Theatre in 2018, its lightly cracked veneer but functional toilets make it a beguiling venue where the ghosts of previous headliners Mott the Hoople and Thin Lizzy occasionally mumble during the fourth pint. AC/DC tap you on the shoulder during the fifth.

As usual, the new album, As the Love Continues, is a record of very few words and it’s up to you to find the meaning you want from it. The first thing you hear is “To the bin my friend, tonight we vacate Earth”.  Its source is a surreptitious recording of sleep talking friend, fellow musician Benjamin John Powers of Blanck Mass. Stuart sees this stolen moment of unconscious storytelling as “a Peter Cook sci fi fantasy”, but there is no prog epic story to tell after this, this is no follow up to Godley and Creme’s Consequences which really was a Peter Cook rock sci fi fantasy.

Mogwai are a band of no significant meaning.

Don’t take that the wrong way. They are a significant band, but a band without an agenda beyond the music itself.

Barry describes their work as “the repressed Calvinist approach to making music, we are just a bunch of boys playing music in a room. We never talk about meaning.”

They don’t spend time in the studio talking about what it’s all about so why should we?

I’m delaying you with pointless words, you should go and listen to them now.

Even their name is insignificant, a necessity for gig announcements and record shop stock filing. They meant to change their name, but never got around out it.  If you brought up Joe Dante’s Gremlins, I don’t think they would wax lyrical, but I could be wrong.

“We are so fucking scornful” – Barry

How do you talk about a record that the band never talk about when they are making it?

Watching them in Dorset at the End of the Road festival, two noisy and disgruntled half-hipsters who were expecting an agrarian V festival complained loudly that they couldn’t understand why there were no lyrics and when would they start singing.  Those elaborately bearded boys had to wait until Laura Marling came on the next day.  What they were complaining about is the part of the reason for Mogwai’s continuing and increasing success.  They can be understood wherever they go and you are allowed to find in it what you want.

People write to them to tell them that a song is the happiest song they know, and then someone else writes to tell them that the same song is the saddest thing they’ve ever heard. Will you walk down the aisle or be buried to “Supposedly, We Were Nightmares”. Perhaps “Drive the Nail” will be most appropriate for your coffin.  It is for the musicologists to explain why “bashing away on instruments can create completely different effects on people in the same room” as Barry sums up the intricate process.

The songs maintain the Lick My Love Pump tradition of writing something magnificent and transcendent, but giving it titles like “It’s What I Want to Do, Mum” and “Fuck Off Money”. If you tried to connect the phrase “It’s What I Want to Do, Mum” with the music you may find yourself seeing a very suspicious child and a very scared mother. What I saw was a soundtrack over a scene of carnage and the blood sodden offspring looking nonchalantly back at the parent, cleaver still in hand…the camera keeps pulling out for five minutes, the carnage is kilometres wide, but don’t let me spoil the vision you might have and I know that the vision I have on a sunnier day may be very different. Mogwai still reward me with synaesthesia, these are very visual sounds. “Ceiling Granny” is triumphant, no carnage in my head here, I will give my wife’s opinion instead, “tell them it made me look up and ask you what it was because I liked it and that doesn’t often happen.”

“To The Bin My Friend, Tonight We Vacate Earth” is the nearest match between sound and song title, it is an ethereal opener, tender and expansive, building in grandeur, it would make peeking out of the bin to watch the spectacle of Earth shrinking in the distance worthwhile.

Though they may be placed in the “file under post rock” corner, this album continues to show that they get broader and broader in their vision. Like Nick Cave and the Bad Seeds and PJ Harvey, Mogwai remain a band whose favourite album continues to be their latest one.

When Barry joined the band to play the flute, he was surprised when he walked in and saw Stuart intricately noodling with some heavy metal, he thought, “My god, they can play.  I thought they were a bunch of chancers.”

Part of Mogwai’s secret (though it is not very secret) is their anonymity. I don’t think anyone has written the name of their favourite band member on their arm with a Bic biro. Just as you are not divided by whether your favourite one is the cheeky one or the surly one or the shy one.

The anonymity contributes to the longevity.

When Alan McGee briefly managed the band he told them, “the good thing about your band is that no one cares what you look like so it won’t matter when you look old and shite.” Stuart thinks he might have added, “you already look like shite”.

Mogwai have advanced without a plan since they were teenagers, there have been no secretive meetings to work out a master plan. Stuart knows that back then there was a very narrow scope of what might happen to you. It is rare to hear a band that have been going for this long and have this many albums behind them who haven’t put out something that should never have been. I would put Sonic Youth, PJ Harvey and Nick Cave and the Bad Seeds on that list, but even my favourite bands have some that have not been out of their sleeve since the first day play.

The record was meant to be recorded in America but the pandemic led to a relocation to Worcestershire and with producer Dave Fridmann separated by an ocean but appearing like an Orwellian oppressor. This pandemic necessity was quickly routine, it also bought them a little more time.

This is also Stuart’s first fully teetotal album, taking a planned year out from the alcohol, he is now a connoisseur of an alcohol free band, and the lack of a lunchtime bottle of cider has done no damage.

Ten records in and still no disappointments or mistaken creative left turns. You may know what to expect from Mogwai, but you will never get the same. This album remains a transcendent soundtrack to whatever movie you are making in your head.

Unable to perform the album for the time being, Stuart hopes the music can take you from somewhere different to where you are, “unless you are somewhere really amazing and then why are you listening to some weird music like this?” Stuart still feels excitement at people hearing this record, a gift for this horrible year.

As The Love Continues shows that Mogwai are still offering solace from the mundane.

If they are at times inscrutable, they never meant to be.

“We are not completely unknown but we’re definitely not famous. Long let the medium fame live on” – Barry